The Middle East in Vogue: Part I

Ever wonder how Vogue pulled off its early fashion shoots in the Middle East? In a two part series The Polyglot reveals the story behind the pictures

Marisa Berenson photographed by Henry Clarke wearing Geoffrey Beene and Halston in Isfahan, Iran 1969.
Fashion magazines have always severed a dual purpose. On the one hand they are the style bibles, disseminating information on the latest trends. But the most legendary of fashion tomes also had the ability to become a jewel box of ideas; transporting its readers to far off lands and exposing them to new notions of beauty. 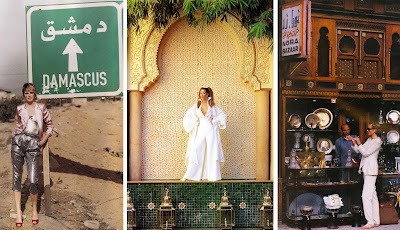 By the 1960’s a Paris streetscape or the edge of a Palm Beach swimming pool were no longer deemed inspiring enough a backdrop for fashion shoots. Instead photographers and editors caught the travel bug and headed to exotic locations all over the globe from Africa to China. This particular fashion caravan also made its way to the Middle East. By the late 70’s and early 80’s it was not uncommon to leaf through an issue of French Vogue and find models posing amongst traditional architecture in Bahrain or leading a heard of camels just outside Kuwait City. By the 1990’s Morocco and Egypt became the destinations of choice for editors at Harper’s Bazaar and Vogue. Christy Turlington in futuristic Claude Montana lounging in the Moorish splendor of a Marrakech palace; or Linda Evangelista perched precariously from the edge of a felucca plying the Nile became indelible fashion images of past decades.

Vreeland in Vogue’s art department, discussing a layout; A model posing in an Op-Art inspired design in front of the Temple of Karnak, Egypt, Vogue July 1965.

To be sure, fashion’s fascination with the Arab world could be traced as far back as the 1920’s and 30’s when couturiers such as Madame Lanvin and Elsa Schiaparelli would vacation in Egypt and Tunis; bringing back with them fragments of inspiration. That tradition continues on today with designers as diverse as John Galliano and Ricardo Tisci at Givenchy, who have visited Cairo and Damascus to research new collections.

Yet despite such early precedents, fashion magazines didn’t venture into the Middle East until the start of the 1960’s when the invention of the jet plane suddenly made far flung locations such as Katmandu and Afghanistan accessible to a new generation. No where was this new spirit of internationalism more pronounced than in the pages of 1960’s Vogue, under the direction of its legendary editor-in-chief Diana Vreeland. 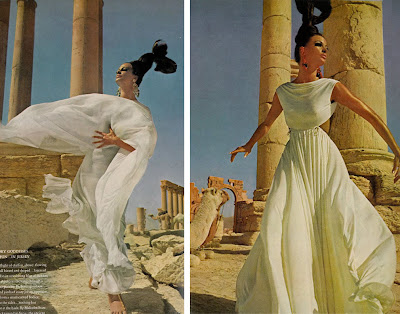 Models captured by Henry Clarke amongst the ancient Roman columns of Palmyra, Syria wearing silk chiffon dresses by Pauline Trigere and Geoffrey Beene, Vogue December 1965.
During her editorial reign, Vreeland would dispatch her favorite photographer Henry Clarke to Iran in 1969 to shoot model Marisa Berenson, amongst the tiled domes of Isfahan wearing Halston and Geoffrey Beene. In addition to the expansive fashion spreads, the magazine would carry reports on the latest gallery openings and chic boutiques in Tehran, as well as profiles of the capital’s bright young things; while British Airways would regularly advertise amongst Vogue’s pages non-stop flights from London to Tehran.

To Diana Vreeland, the “Middle East” meant history, magic, atmosphere and exoticism. Yet capturing these portraits of models in far flung locations required a certain amount of preparation and the logistics were tricky. It meant contacting key figures, pulling strings, doing research and acquiring all kinds of cooperation that wasn’t always forthcoming.

© THE POLYGLOT (all rights reserved) CHICAGO-PARIS
Posted by The Polyglot at 4:01 PM