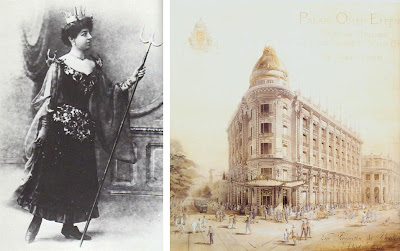 Dressed to kill at one of Cairo’s fancy-dress balls, early 1900’s; Omer Effendi, the turn-of-the-century Cairo department store was designed in 1905 by architect Raoul Brandon, and still stands today at the corner of Abdelaziz and Rushdi Pasha Street. Although it lost much of its luster in the years following the revolution, new owners and a recent renovation have restored this Cairo landmark to its former glory.

Egypt has always had a somewhat tenuous relationship with its more recent past. While its ancient Pharonic monuments are vigorously marketed abroad to lure tourists, and medieval Islamic buildings have been meticulously restored in downtown Cairo, one chapter in Egyptian history has been left to collect a thick layer of dust.

Walking around Talaat Harb Square in downtown Cairo today reveals once elegant Belle Époque and Art Deco buildings from a time when the city was known as “Paris along the Nile.” Now cracked and covered in a layer of soot from years of neglect, it’s hard to imagine women in sundresses and men in linen suits strolling past such buildings. They would shop at stores such as Maison Groppi, the elegant tea room and patisserie that once delighted a young princess Margaret and Elizabeth of England with its confections.

Princess Fawzia and Princess Faiza attending a recital at the Cairo Opera in 1950. At the turn of the century carriages would deposit Pashas at the main entrance, while ladies were escorted to private viewing boxes on the second floor; Built in 1869 by the Khedive Ismail to celebrate the opening of the Suez Canal, the Cairo Opera House was the venue for the first performance of Verdi’s Aida, also commissioned by the Khedive. The Opera house was destroyed by a fire on the morning of October 28th, 1971.

Although Abdeen Palace, the former residence of the late King Farouk, is now a museum, countless other public buildings, mansions, and minor palaces have either been torn down or left to decay gradually. One exception is the Cairo Marriotte Hotel, housed in a former palace originally built by the Khedive Ismail for Empress Eugenie of France, who attended the inauguration of the Suez Canal.

Like Cairo, Alexandria is very much a city of faded grandeur, where one need only look beyond the chaos to find remnants of its fabled past; places like Pastroudis, the legendary Greek Café that welcomed writers and poets from around the world, or Joseph & Alfred Youssoufian, the once venerated Armenian jeweler.

A banquet at Abdeen Palace in Cairo, 1930’s; One of the Jewelry Museum’s many ornate salons.

Most of the city's famous bars, restaurants and night spots are no longer in business, their owners long ago returned to Europe. Only a few - mostly elderly people - remain from the once prosperous and large expatriate community of Greeks, Cypriots, Italians, French and Armenians who made Alexandria, Egypt's most cosmopolitan city. Yet it is here that the Egyptian government has chosen to embark on a somewhat unusual cultural experiment, and a tentative step towards acknowledging the country’s recent Belle Époque past.

The Royal Jewelry Museum is housed in the former palace of Princess Fatima El Zahra; the daughter of Prince Haydar Sinasi, a well known poet. Begun in 1919 and completed 1923, the grand building is the perfect example of a 1920’s version of the 18th Century (all be it adapted to Middle Eastern tastes), which was very much in vogue during that period in Egypt.

Princess Fawzia of Egypt, shortly after her marriage to the Shah of Iran in Cairo on March 16, 1939; The new Empress of Persia wore a tiara commission in 1938 by Van Clef and Arpels; A view of Alexandria’s elegant Fouad street, as it appeared in the 1920’s.
Although a member of the royal family, Fatima’s actual title was that of nabila, which ranked just below emira, or princess. She married Ahmed Yeghen Bey, who through his mother’s family also descended from Muhammed Ali. When it came time to build their palace, they chose Zizinia, a part of the city named after a Greek clan and one of Alexandria’s richest families, who owned much of the land in the area. Zizinia’s location above the nearby Mediterranean offered refreshing sea breezes and soon opulent villas sprang up in the middle of lush gardens filled with roses, exotic plants, and trickling fountains.

The palace is divided into two areas with separate entrances: the Selamlik, province of the husband and men of the household, and the Haremlik, the domain of the wife and women. Once this concession had been made to Islamic custom however, all the rooms were decorated in a distinctly European style. 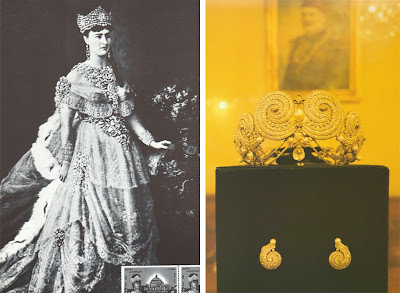 A portrait of Princess Fatma, the daughter of the Khedive Ismail. The princess helped found Cairo University in 1908; The most stunning piece on display at the museum is a platinum tiara with matching earrings, set with 2,159 diamonds and flawless white pearls. It was originally commissioned from a Paris jeweler for Princess Shwikar, wife of King Fouad (whose portrait is in the background). The set was later passed down to Queen Farida, King Farouk’s first wife, who lived in exile in Paris until her death in 1988.
Although many of the original furnishings had been dispersed over time, much remains to delight the eye. Visitor’s can walk through rooms decked out in rich parquet flooring made from exotic woods, sinuous moldings, and dripping crystal chandeliers all imported from France. While Italian and French artisans created frescoes on the ceilings recalling epic tales from Greek mythology, as well as over-ripe cupids that gaze down on passers by.

The furnishings that do remain are the kind of over-ornate and over-gilded heirlooms favored by members of the Egyptian Royal family; a style that came to be known derisively as “Louis-Farouk”. Despite this, the patina of time has transformed these pieces into alluring relics from an opulent past.

More intriguing perhaps are the portraits lining the walls of princes and princesses decked out in the latest fashions of the last two centuries, all sporting opulent jewels. Even better are examples of the real thing glittering in nearby vitrines that exemplify the splendor of Mouhammed Ali’s Egyptian court. 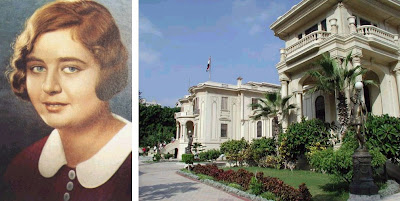 A portrait of Princess Fatima El Zahra, mid 1920’s; A view of the Royal Jewelry Museum’s restored neoclassical façade with entrances to the separate residences for men and women. 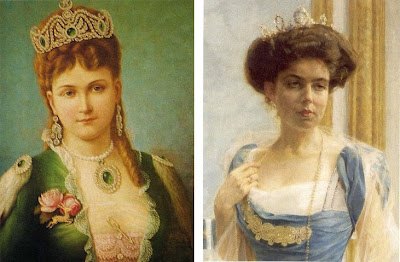 One portrait on display at the museum is a late 19th century oil painting, believed to be of Princess Djemila Ismail; Of great sentimental value to the Danish Royal Family is a diamond and platinum Cartier tiara. It was originally a wedding gift from the Khedive of Egypt to Princess Margaret of Connaught, who was to marry the future King Gustav VI Adolf of Sweden in 1905. Egypt was the place where the royal couple first met. Here, a 1909 portrait of Princess Margaret by Axel Jungstedt, wearing the Khedive’s tiara as a corsage ornament.

One of several frescoes found throughout the palace's reception rooms, painted by Italian artisans; A tiara by Cartier, commissioned in the 1930’s with a lotus motif that has been a symbol of Egyptian Royalty dating back to Pharaonic times.

A portrait of Khediva Emina, wife of Khedive Tewfik; Though many of the royal jewels were seized in 1952 when the monarchy was ousted, fine examples remain in the museum’s collection, such as a late 19th century set that includes a gold necklace encrusted with diamonds, pearls and rubies. It is typical of the jewelry found in an Egyptian princess’s trousseau.

© THE POLYGLOT (all rights reserved) CHICAGO-PARIS
Posted by The Polyglot at 8:43 PM