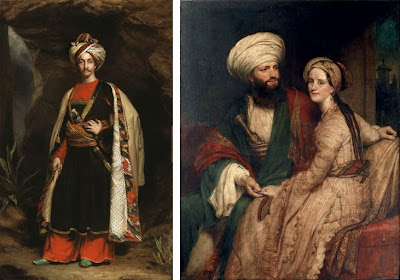 In 19th century Europe, only the rich could afford to travel to the Middle East, and many had their portraits done in Oriental costume. From left: Captain Colin Meckenzie in Arab dress, by James Sant 1842; A portrait by Henry William Pickersgill of James Silk Buckingham and his wife Elizabeth in Oriental costume, Baghdad 1825.


If you have been following the news lately, then you would be forgiven for thinking that the chasm between the West and Middle East is larger than ever before. Yet in the last 600 years there have been many positive encounters and exchanges between the two cultures. Over the centuries one will find numerous examples of artists being inspired, ideas exchanged and commercial ties built. Such encounters have had the unlikely affect of influencing the way both men and women dressed. 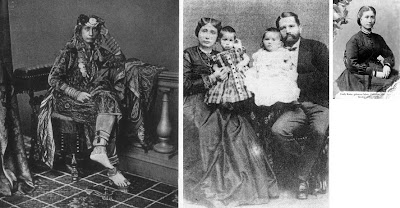 Born Salme bint Saïd, Princess of Zanzibar and Oman in 1844, she adopted the name Emily Ruete after marrying a German merchant, Rudolph Heinrich Ruete in 1867. Although the Omani princess had her portrait taken in traditional Omani dress at a studio in Hamburg, in her daily life she wore the corseted gowns and hoop skirts of the era.
19th Western painters have often found inspiration in the Orient. An oil painting by Hans Eworth, A Turk on Horseback (1549), at the Tate gallery depicts Suleyman I “The Magnificent,” the Sultan of the Ottoman Empire; a man whose kingdom was said to stretch from North Africa to Persia and from Rhodes to Vienna. Such paintings would spread the vogue for Oriental costume amongst many of Europe’s nobility. The painting, in which Suleyman is depicted as an elegant gentleman dressed in white, gold and red robes, (complete with a crowned turban); was emulated by many rulers including Henry VIII, who wore similar robes when participating in London processions. It is just one example of numerous paintings and engravings that were circulating around Europe during the 16th Century.

Throughout the centuries menswear has enjoyed a healthy amount of cross-pollination between the West and the Orient; T. H. Lawrence (Lawrence of Arabia) in an embroidered wool thobe and keffiyeh, photographed in England in the 1930’s; A group of Iraqi gentlemen in tailored suits, Baghdad 1930’s.

Experiencing the Middle East in the 1500’s was a privilege strictly reserved for the aristocracy, who were the only ones who could afford to travel. Those who were lucky enough to visit, naturally had a desire to boast about it and brought back objects that served to signify their wealth. Exquisite Turkish carpets in particular were 16th-century emblems of taste and status, and regularly appeared in Renaissance art. But even more prized was the privilege of having ones portrait painted while wearing Arab costume. Countless other goods were also imported from the Orient, including teas, spices, fabrics, and foods; the demand for which contributed to the emergence of the East India Trading Company, which was established under charter by Queen Elizabeth I in 1600. 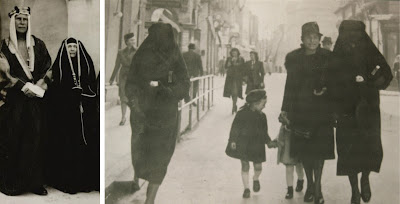 The Earl and Countess of Athlone photographed in Arab dress, during their 1938 visit to Saudi Arabia; Christian and Muslim women walk down a busy street in 1940’s Zagreb.

Despite this, private travel from Europe to the Middle East was rare before the 1930’s. But travel for warfare, diplomacy and trade had been going on for centuries. While outside Europe, many of these early travelers would often spend years in cities such as Cairo, Baghdad and Damascus where they would adopt the local “Oriental costume” as their own. There were many reasons behind this. Some believed they would be safer by dressing like the local people. While academics visiting the Middle East often wished to appear incognito in order to facilitate their research and not attract attention.

In the early part of the last century, well to-do Egyptian, Lebanese and Syrian women would often have their studio portraits taken in the latest western fashions, while on vacation in Europe. From Left: Fatma Sid-Ahmed, Cairo 1905; Sannia Mardam Bey and Karima Rashed Pasha, Syria 1910; A member of the Sursock family, Paris 1880; Nada Homsi, at Juan les Pins, France 1932.

By the mid 19th century, one began to see a reverse in the stream of influences, as the Arab-upper classes increasingly began to take cues from their European counterparts. Much of this was due to the spread of the Ottoman Empire throughout the region, as well as the Khedive Ismail’s drive to transform Egypt into a modern nation. Over night grand Beaux Arts buildings and boulevards sprung up throughout Cairo; earning it the title of the “Paris along the Nile.” These changes also transformed the way in which upper-crust Egyptian men and women dressed; sporting European tailored suits and corseted dresses by the Parisian couture houses such as Worth, Doucet and Pingat. 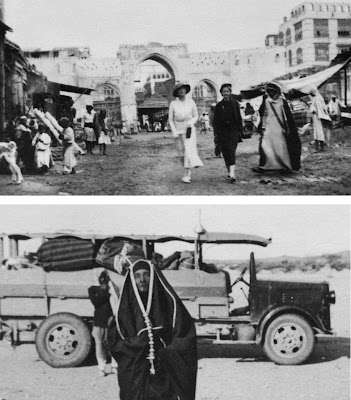 Princess Alice visiting Jeddah during her 1938 trip to Saudi Arabia; Below: During her visit the princess often donned the traditional Saudi cloak or Abaya, while traveling throughout the Kingdom.

For one group of European visitors and residents, donning oriental dress was also about affirming solidarity with Arab culture. As countless portraits demonstrated over the centuries, many of these travelers chose to record themselves in the dress they adopted or purchased abroad and subsequently brought back with them to Europe.

In 1938, Princess Alice Countess of Athlone, a granddaughter of Queen Victoria, became the first member of the British royal family to visit Saudi Arabia and Bahrain. During her three-week long trip, the princess took more than 320 photos, which were later acquired by the King Abdulaziz Library in Riyadh. She was 55 years old at the time of her visit, which came about after a chance encounter with King Abdul Aziz ibn Saud’s eldest son at an Ascot racecourse. Amongst this extraordinary collection are images of Princess Alice wearing the traditional cloak or abaya, following Saudi custom. Other times, such as in the port city of Jeddah, she would walk around freely in her usual traveling clothes. She was one of the few people outside the country to experience Saudi Arabia at a pivotal point in its history, just prior to the discovery of oil.

When the Khedive Ismail embarked on a mission to modernize Egypt in the 19th century, menswear (at least that of the nobility) was not spared a makeover. By the early 20th century the Egyptian upper classes were sporting tailored suits and the latest European fashions. From Left: A group portrait, Cairo 1940; two young women dressed in European suits and fez’s, Zghorta, Lebanon 1927, Hikmat Mardam Bey, Lebanon 1926.

© THE POLYGLOT (all rights reserved) CHICAGO-PARIS
Posted by The Polyglot at 12:15 PM