Growing up in Geneva, Iranian/Egyptian fashion journalist and student Soraya Bakhtiar acquired her passion for all things fashion, art and design from a family of creative women. These include her mother, the designer behind May Day Knitwear, her aunt the painter and poet Alyaa Kamel, as well as her grandmother who is an established writer. As the embodiment of this tiny yet cosmopolitan city by the lake, the multi-lingual Bakhtiar took a break from her jet-setting travels to talk to The Polyglot about her hometown. 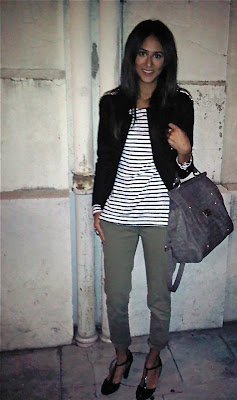 What makes Geneva unique from other European cities?Although I’ve traveled all over the world, there is nothing quiet like Geneva’s quality of life. It’s a city known for its beauty and peacefulness. With four official languages and a reputation for neutrality, Switzerland has a thriving community of expatriate polyglots, many of whom work in Geneva for international agencies such as the Red Cross and WHO. It’s worth visiting the Palais des Nations, which is home to the second-largest United Nations office, after New York. The city’s cosmopolitan history also dates back to the Romans, whose influences can still be found in Geneva’s architecture.

Has Geneva’s retail and design scene evolved over the years?It has definitely evolved in the last 5 years, with the emergence of a new breed of cutting edge boutiques and galleries. Septième étage on the Rue du Perron, showcases coveted New York labels such as Alexander Wang (my personal favorite) as well as the work of avant-garde Swiss designers. For affordable jewelry and unique handbags (including a selection from Beirut’s own Sarah's Bag and C by Cynthia), head to Colie Boutique in Geneva’s Old Town. To discover contemporary Swiss design, stop by Philippe Cramer’s atelier at 8 rue de la Muse. The New York-born Cramer, who is a Parsons School alum, designs everything from furniture, to lighting and glassware. Recently he launched a line of nature inspired jewelry that caught the attention of Vogue editors.

Where is the best place to experience the city’s culinary scene?Thanks to its multi-cultural population, eating out in Geneva offers a huge range of culinary options. On a cloudy Sunday morning, my favorite place for brunch is Le Pain Quotidien in Champel. The country-chic boulangerie /café is known for its organic artisanal breads and delicious tartines. Traditional Japanese cuisine can be found at Kakinuma in Eaux-Vives. Its intimate dinning room is the perfect venue for a low key dinner with friends or a romantic date. To savor the best pizza in town, head to the recently opened Luigia on rue Adrien-Lachénal. Housed in an industrial loft-like space, this restaurant has become the preferred dining spot for the city’s chic young set. For pre-dinner cocktails, the Leopard Room at the Hotel d'Angleterre offers a cozy piano bar and intimate lounge area.

What is your favorite area of the city?Geneva’s Old Town is probably the most atmospheric and liveliest quarter in the city. Its cobble-stone streets, medieval buildings, antique shops and art galleries capture the city’s 2,000 year history. My one-bedroom apartment in the heart of Old Town is a block away from the charming Place du Bourg-de-Four. Looking out on the square is "La Clémence", a café whose terrace is a popular meeting place during the summer. I also recommend visiting the Saint Pierre Cathedral. After a lengthy climb up its north tower, you will be rewarded with breathtaking wraparound views of the city.

Where can one find Geneva’s thriving cultural scene?
The area around the artsy-boho district of Plainpalais is home to a vibrant art scene and a buzzing cultural community. The Museum of Modern and Contemporary Art, is housed in a former 1950s factory, while neighboring streets are home to innovative art galleries such as the cutting edge Analix Forever, which showcases new media and virtual art. The Musée d'Art et d'Histoire in Old Town, houses an impressive cross-section of art history. This includes a collection of Egyptian, Greek and Roman antiquities, as well as works by 20th century masters such as Pradier, Rosin and Giacometti. For a real treat head to the museum’s hip café/restaurant, "Le Barroco."

© THE POLYGLOT (all rights reserved) CHICAGO-PARIS
Posted by The Polyglot at 6:59 AM