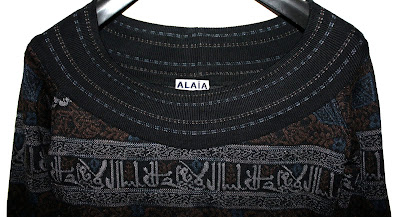 If you happened to be hanging around the tents dotting the Louvre’s Cour Carrée during the Fall 1990 Paris season, then you may have noticed some of the industry's top models running around in knit bodysuits “tattooed” with Arabic calligraphy. The most coveted item of that particular season was the handiwork of Azzedine Alaïa.

Fashion has always dipped into the Orient for inspiration, reinterpreting the caftan and using prints that mimic the geometry of Arabesque tiles. Despite this Western designers are still somewhat reluctant to incorporate Arabic script into their work. For most designers who can’t read Arabic, calligraphy is seen from a purely esthetic perspective. Their intent is not to create readable text so much mimic the beautiful forms that individual letters produce. 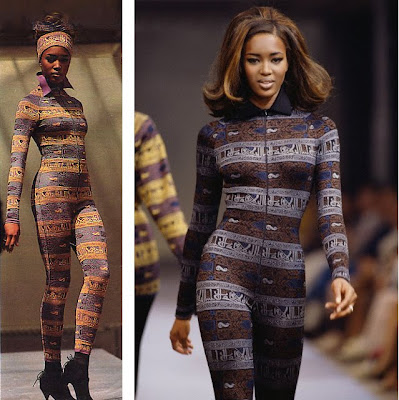 Naomi Campbell modeling two iconic bodysuits from Alaïa’s Fall 1990 collection. Embroidered with Arabic calligraphy in the Kufi script, the bodysuits became a uniform amongst several top models during that particular Paris season.
Yet according to Samia Mahmood, an LA based stylist, this reluctance on the part of designers may boil down to a fear of offending any specific culture. “Being culturally sensitive is important, and I think a lot of Western designers are curious about the Middle East, but they are only now beginning to really discover it again,” explained Mahmood. “Arabic calligraphy in particular has been a no-go-zone for quiet sometime, because it is so closely associated with the language of the Quran. There is a fear that it may offend someone, when the intent is really to celebrate diverse cultures.”

In a post-9/11 world where cultural sensitivities still run high, many in the fashion industry have not forgotten one particular incident back in 1994. At the time, Karl Lagerfeld caused an uproar at Chanel by sending Claudia Schiffer down the runway in a tight fitting bustier embroidered with Arabic script. A guest in the audience pointed out that it was a passage from the Quran and Chanel promptly pulled the dress out of the collection and issued an apology. Although it was later revealed that the verses were in fact a Mughal love poem taken from the Taj Mahal; the incident was enough to deter other designers from using calligraphy in future collections. 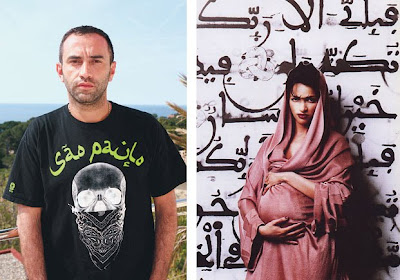 Givenchy’s Designer Ricardo Tisci wearing a t-shirt with Arabic lettering. Tisci is frequently influenced by the Middle East in his work. When he first started designing couture for Givenchy his first major clients were from the region; In May of 1995 Paris-based Tunisian designer Azzedine Alaïa created a Middle Eastern inspired hooded cloak as a maternity dress for Farida Khelfa, his close friend and muse. She was photographed in front of a large mural painted in Arabic calligraphy at the Musee National des Arts d’Afrique et d’Oceanie in Paris.

In the Middle East Arabic script is used for both religious and secular purposes. It can also mean different things to the variety of nationalities and religions in the region. Yet whether one is Turkish, Iranian, Syrian, Muslim or Christian, Arabic calligraphy still provides a symbolic cultural link that unites the Middle East together.

Today a new crop of designers from the region and abroad are pushing the envelope by employing Arabic calligraphy in innovative ways. Their work not only appeals to a new generation of trend setters, but also delivers a message about contemporary Middle Eastern culture to a wider audience. 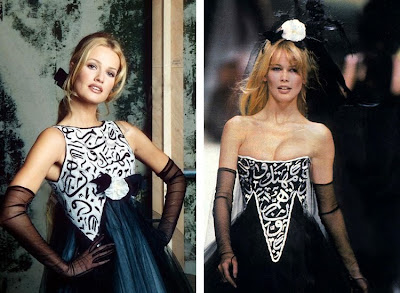 Karen Mulder and Claudia Schiffer modeling Chanel couture evening gowns embroidered with Arabic calligraphy by Lesage, from the house’s Spring 1993 collection.
One such label is Nimany. Fusing art, calligraphy and old Persian culture, Nima Behnoud creates modern and fashionable clothing worn by everyone from celebrities such as Heidi Klum to hipsters in Beirut. The label’s name came about after Behnoud added NY to the end if his first name to create his own clothing line, Nimany. “It was really New York that opened up my mind,” said Behnoud, who moved from Tehran to San Francisco in 1994, to study art and design and work as an art director for a prominent ad agency. Nimany’s signature style comes from taking quotes from Persian poets such as Rumi and Hafez using ancient Persian typography and layering them onto t-shirts. The result are visually gripping patterns that have earned Nimany a huge following in the West and the Middle East. 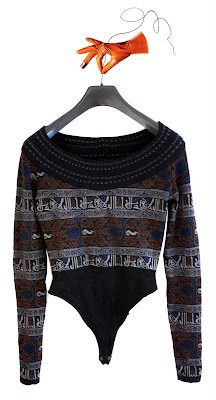 Calligraphy in the Kufi script embroidered into a knit bodysuit from Alaïa’s Fall 1990 collection.

© THE POLYGLOT (all rights reserved) CHICAGO-PARIS
Posted by The Polyglot at 10:57 PM

I must say, I really enjoy the articles in this blog!
Well, regarding the topic, I think we might witness the return of arabian calligraphy in the upcoming two years, because lately in the local region, arabic calligraphy made a huge return in the Middle-Eastern market, so the western fashion market might get inspired. Let's just hope so, I remember growing up as a kid, enjoying calligraphy on couture, that never changed!