Part of Mayassa’s role as head of the Qatar Museum Authority, includes attending cultural events and art biennales around the world to promote the Emirate as a cultural hub for the region. Image: Mayassa attending the Doha Party at the 2009 Tribeca Film Festival in New York, April 25, 2009; Attending the opening reception of the Takashi Murakami exhibit at Versailles Palace. Pictured here with the French Minister of Culture Frederic Mitterrand and Japanese artist Takashi Murakami, September 12, 2010.

Today it is not uncommon to find Sheikha Mozah Bint Nasser Al-Missned, the wife of the Emir of Qatar, addressing the United Nations General Assembly in New York or leading a Qatari delegation to an international conference in Paris. If anything, her willingness to engage an international public through interviews and dialogue has created a much needed bridge between the East and West; not only breaking down misconceptions but also creating new friendships.

Sheikha Mayssa during the opening reception at of the Takashi Murakami exhibit at Versailles Palace, September 12, 2010; Sheikha Mayassa attending a session of the United Nations General Assembly in New York with her mother, Sheikha Mozah Bint Nasser Al-Missned in 2005.
In the last few years the Emir of Qatar and his wife have also been preparing their own daughters to take on more high-profile leadership positions, not only within Qatar but also at an international level. That exposure began early on in their lives when Sheikha Mayassa and her sister Sheikha Hind would accompany their parents on official visits abroad or attend an economic forum hosted by Bill Clinton. Those early experiences would prepare them for the roles they would take on in the future.

Today Sheikha Mayassa has become widely recognized, thanks in part to an interview with W magazine, photographed by Juergen Teller. As head of the Qatar Museums Authority, the Duke University grad is responsible for running a multibillion-dollar organization that recently opened Qatar’s new Museum of Islamic Art; an ambitious project in itself to bridge the Western and Arab worlds through art and culture.

Sheikha Mayassa meeting with Sonia Gandhi in New Delhi; Visiting a makeshift school in Pakistan shortly after the earthquake, 2007.
By the time she hit 25, Mayassa had already clocked in time at the United Nations General Assembly in New York, met with Prince Charles and the British Prime Minister at 10 Downing street and had been presented to the Emperor and Empress of Japan. But despite such glamorous company, one gets the impression that she doesn’t take those privileges too lightly. She is also known as a highly articulate no-nonsense individual with a “can-do” attitude when it comes to Qatar’s humanitarian efforts abroad.

Shortly after the devastating earthquake which hit Pakistan, Sheikha Mayassa boarded a plane for Islamabad carrying several tones of aid comprising of blankets, sleeping bags and tents. During her visit there she met with earthquake survivors, as well as government officials and education authorities to discuss rebuilding efforts in the worst-hit areas.

Sheikha Hind leaving the Elysee Palace with her father Sheikh Hamad Bin Khalifa Al-Thani, after a meeting with French President Nicolas Sarkozy in Paris on June 22, 2009.
She is no less passionate when it comes to her work at the new Islamic Art Museum, as well as what she hopes to achieve there. “There is a big misconception about what Islam is,” she explained in an interview with W magazine. “Originally, Islam was a culture. It wasn’t just a religion. You had so many people who looked different, spoke different languages and had other religions, but all lived under the umbrella of Islam.”

That particular mission statement was reflected in the museum’s inaugural exhibit, “Beyond Boundaries-Islamic Art Across Cultures,” which drew a link between priceless examples of ceramics, metal work, manuscripts, jewelry and textiles from places as diverse as Syria, India, Spain and Uzbekistan. Accompanying the exhibit was a series of thought provoking lectures, by some of the worlds well known experts on Islamic art, as well as academics and curators. 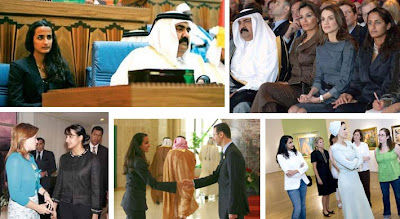 Clockwise: Attending a conference in Senegal with her father the Emir in 2009; Seated next to her mother Sheikha Mozah Bint Nasser Al-Missned, Queen Rania of Jordan and the Emir of Qatar at an economic forum hosted by Bill Clinton in 2007; Hind visiting Havana, Cuba in February 2008 for a round of talks with Cuban President Raul Castro; Meeting with Syrian President Bashar Al Assad during the Arab Summit in Damascus, March 2008; Visiting the Malba Museum of Latin American Art in Buenos Aires, during a visit to Argentina with Sheikha Mozah Bint Nasser Al-Missned in 2010.
Sheikha Hind, who also graduated from Duke University in Durham N. Carolina, has been increasingly gaining international attention as well. As Director of the Emir’s Office and Chief of Staff, Hind doesn’t simply stand on the sidelines but has become a key advisor to her father, helping shape policy, as well as representing Qatar at numerous conferences and official visits abroad. By doing so she has become the global face of a new generation of Qatari women. 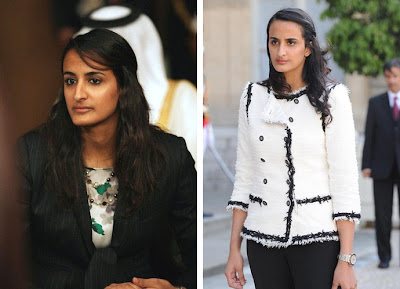 © THE POLYGLOT (all rights reserved) CHICAGO-PARIS
Posted by The Polyglot at 10:52 AM