February 2010 marks the re-launch of the Middle East’s first luxury e-commerce and lifestyle portal, as a sleek new website dedicated to bridging cultures through a shared appreciation for design, art and fashion. At Dia, the Middle East isn’t a specific geographic location so much as a state of mind in tune with the 21st century.

It is a vibrant cosmopolitan world inhabited by hip Middle Easterners scattered throughout the globe. They grew up in one city, studied in another and worked in a third, yet there is still one place they call home-the Middle East. With this in mind, Dia was created to capture the true spirit of a region steeped in history, culture and innovation. 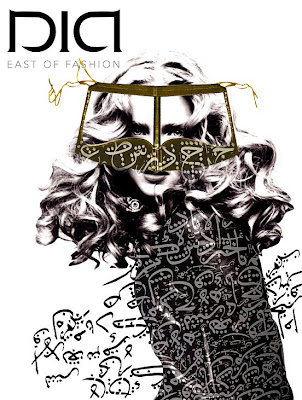 This unique online retailing/lifestyle experience is a reflection of Dia’s founder, Rasha Khouri, a former investment banker turned entrepreneur. A true cosmopolitan, Lebanese/Palestinian Khouri grew up in New York and lived in cities as diverse as Paris and Beirut, before settling down in London where she founded Dia in 2007.

The most recent addition to the Dia team is Wafa Obaidat. The editor of Sketchbook magazine and Creative Director of Agency Obaidat London, Wafa comes on board as the new Editor in Chief of Dia Magazine.

Joining the DIA team in 2008, The Polyglot will serve as Editor at Large for DIA’s revamped online magazine.

DIA is currently looking for new contributors. Please contact wafa.obaidat@diadiwan.com
Posted by The Polyglot at 5:30 PM